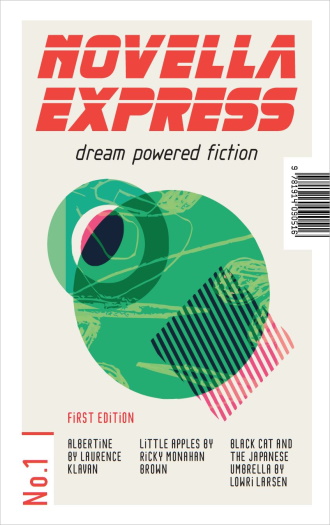 Novella Express is a book series celebrating the full diversity and energy of literature's most precious form ― the novella. In Edition #1 find three new voices writing across different subjects and tones, all chosen to celebrate the skill, the passion and imagination of novella writers from across the globe.
Each of the book edition will be available in print form (including colour pages) and sold in high street shops through our distributor, or available from this website.
In addition, each novella will be produced as an eBook, and distributed through our partners Faber Factory.

Ricky Monahan Brown suffered a massive haemorrhagic stroke in 2012. Doctors gave him a one-in-twenty chance of a good outcome, where a 'good outcome' would be surviving in a non-vegetative, non-plegic state. The resulting survival memoir, Stroke: A 5% chance of survival, became one of The Scotsman’s Scottish Nonfiction Books of 2019. Ricky’s short fiction has been widely published, including in 404 Ink literary magazine and the Dublin Inquirer. The live literature and music series he co-founded, Interrobang?! won the Saboteur Award for the Best Regular Spoken Word Night in Britain for 2017. A stroke awareness ambassador for the British Heart Foundation, Ricky lives in Edinburgh with his wife and their son.

Lowri Larsen is a writer based in Wales. She was awarded a first-class honours MA from University College Dublin. She was awarded a grant from Literature Wales to write this novella. The novella "Black Cat and The Japanese Umbrella" was longlisted for The Reflex Press Novella Award.

Laurence Klavan wrote the story collection, "'The Family Unit' and Other Fantasies," published by Chizine. An Edgar Award-winner, he received two Drama Desk nominations for the book and lyrics of "Bed and Sofa," the musical produced by the Vineyard Theater in New York and the Finborough Theatre in London. His graphic novels, "Brain Camp" and "City of Spies," co-authored with Susan Kim, were published by Chizine, and their YA fiction series, "Wasteland," was published by Harper Collins. His Web site is laurenceklavan.com.

Purchase Novella Express Edition #1 From the Publisher via PayPal