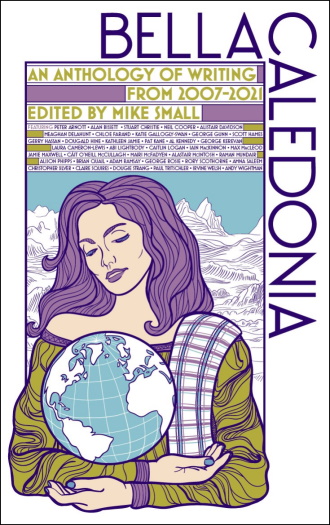 Kathleen Jamie / Meaghan Delahunt / Andy Wightman / AL Kennedy / Laura Cameron- Lewis / Alan Bissett / Irvine Welsh / Raman Mundair / Mairi McFadyen / Caitlin Logan / Dougie Strang /  Iain MacKinnon  / Dougald Hine
In October 2007, writers Mike Small and Kevin Williamson launched Bella Caledonia at the Radical Book Fair in Edinburgh. Since then, Bella has consistently explored ideas of self-determination and offered Scotland’s most robust and insightful political commentary.
In the run up to Scottish independence referendum, international interest grew and Bella Caledonia had more than 500,000 unique users a month, with a peak of one million in August ― and since then has been given multiple awards recognising it as one of the top 10 political blogs in the UK.
This anthology, curated by Mike Small, is a flavour of Bella’s output over these 14 years ― the editor’s pick.
Bella is aligned to no political party and sees herself as the bastard child of parent publications too good for this world; from Calgacus to Red Herring, from Harpies & Quines to the Black Dwarf.
Under Mike’s editorship, Bella has developed a ‘Fifth Estate’ as a way of disrupting the passive relationship of old media, creating something more active and appropriate for the 21st century ― it’s about concentration of ownership, and bringing together radical coverage with cultural analysis. Hence the plethora of wide-ranging voices in this anthology, each representing outlier viewpoints in contemporary society ― novelists, poets, bloggers and journalists publishing in non-mainstream media outlets, and the social media.

Make a direct donation to Bella Caledonia by pre-ordering the anthology.

Bella Caledonia has been a flagship for progressive thought in Scotland, providing a platform for informed and creative writing, advocating a progressive and independent nation fit for the future."

Bella has been to be a constant thorn in the side of the powerful voices who would prefer that conventional wisdom went unchallenged, that awkward questions went unasked, and bold solutions went unheard."

Mike Small is a writer, journalist, author and publisher. He has written for the Guardian, Sunday Herald, Sunday National, Open Democracy, Variant, Lobster and Z Magazine. He is currently working on a biography of Patrick Geddes and a history of Scottish Anarchism. He has edited Bella Caledonia since 2007.