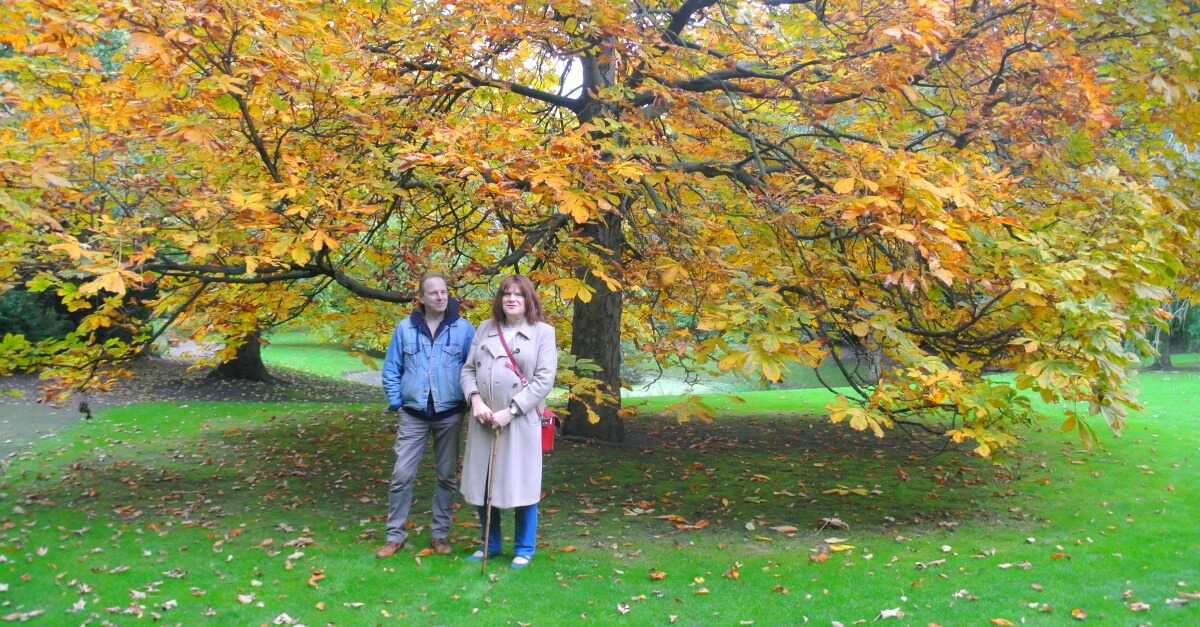 I don't think that either of us especially like having our photograph taken - - so this was a rare and special moment.

The photograph was taken by Jane Goldman, on a pleasant literary outing, one autumn afternoon, here on our beautiful home planet.

It was indeed a literary walk. It is nice to talk books. It's almost as if that conversation is separate from our day jobs - - Lesley a poet, myself a publisher, and Jane a reader in Poetics and editor of the Cambridge Virginia Woolf - - as well as a poet in her own right.

I felt as we strolled around this delightful enclosed central Edinburgh parkland, we were far from even ourselves.

We were indulging in that pure and bookish conversation which to others might sound silly - - the names of writers, their works, their effect on us, anecdotal, experiential.

A dream really. The only other way to inhabit books, not to write them - - but to disucss them with others who take bookishness seriously.

Each progress in the art of writing is bought only by the surrender of a self satisfaction.

And what the hell did Andre Gide mean by that?

Every writer brings their ingenuity to bear on preserving the value of the form.

That is the fun part. During this week I have concluded other fun deals with myself, including completing the typesetting of John Herdman's CLAPPERTON.

I have a meeting to consolidate my distribution through Faber Factory; this important plank props up one side of the business. I have made contact with Gardners, to apply for an account with them as wholesaler. I am converting my library of titles to the specs of these distributors.

I have other plans for printing some books for Christmas, including 200 early Edinburgh Editions of Lesley's book IT'S ABOUT TIME. I have been working on the final design and it is a terrific book, my favourite thing I have ever published.

The world out with the production side of life is mechanical, and often beyond the creative types.

It is a different kind of slog and I have been told by other publishers that the process will be marked by the frustration of losing money.